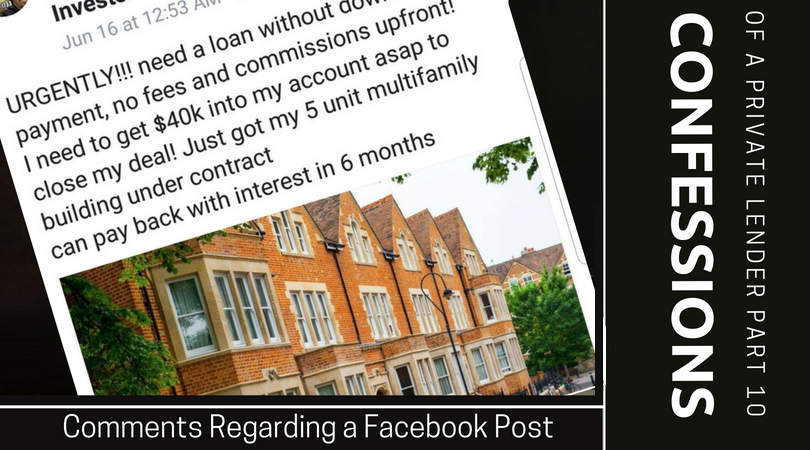 The paragraph below was posted on Facebook in a closed group with over 4,000 members interested in real estate investing. The poster asked for my feedback and gave me permission to share it in a blog post.

“URGENTLY!!! need a loan without down payment, no fees and commissions upfront!  I need to get $40k into my account asap to close my deal! Just got my 5 unit multifamily building under contract can pay back with interest in 6 months”

The post begins: “URGENTLY!!!”.  I suspect the poster wanted to convey he needs immediate help. He emphasizes that by typing the word in all capitals and, as if the message has not already been communicated, adds 3 (three!!!) exclamation points. This plea is being made in a group where he is not well known—it is being made to strangers.

Desperation: a state of despair, typically one resulting in rash or extreme behavior

Unfortunately, the message he is actually sending is that he is desperate. (A danger of asking for money on social media is that you may appear desperate or to be begging when you reach out to strangers; even if you are not.)  This post SCREAMS desperation.  When was the last time you wanted to work with someone who was desperate? The poster is raising suspicion with the first word.

Why is the need urgent? What did they do to get themselves into such a situation? Will they be able to fulfill any promise they make or will they say anything to get them out of their situation? Are they looking for a partner or just a way out?

Control : the power to influence or direct people’s behavior or the course of events

After establishing that they are desperate, that they need a fast solution, the poster lists a series of things that they will not accept. No “down payment, no fees, and commissions”. They are communicating that they will be in control, that they have a clear idea of how they want any solution to look, that they are not open to creative solutions. The poster is stating that they will not put any more of their personal funds in the deal and that they may not have any personal funds at risk (I do not know if the last part is true). They are not willing to make any further commitment to this deal up front. Why do you think it will be compelling for someone else to assume the risks in your deal if you are not willing to do so yourself? The top line of the post has probably alienated almost everyone in the group who was in a position to help.

Though I did not inquire further into this deal, it appears the loan is needed for a down payment on a purchase. The loan, if obtained, would become the down payment. The poster may not need a “down payment” to secure a private money loan. The loan could be secured with a lien on the property. Many private lenders do not charge fees. When they do, many are content to allow those fees to be paid at the end of the loan term. Private lenders do not usually charge commissions. So, the poster is turning his desperate plea into a demand, but he is demanding things that he could easily get if he attracted a lender who wanted to participate in the deal. There are not many lenders who would wish to rescue a desperate borrower who believes they are dictating the terms of the deal.

Need: circumstances in which something is necessary, requires a course of action

Next the poster clarifies his “need” and, again, shows he is desperate because he needs funds “asap” to close his deal. I assume he will lose the deal and, perhaps, some personal funds if he does not find a lender. He specifies that he needs $40k. That is not a large sum to many of those who frequent this fb page. There are several people who commented on this thread who have made private loans much larger than that and would likely be willing to do so again when they find an appropriate deal and partner. However, if the poster is remembered by those he has reached, it is unlikely to be favorably.

To me, and other experienced lenders in this group, $40k may be too small an amount. Small loans often take more work than larger ones and the return is not usually great enough to be attractive…unless, I see something that attracts me to the deal or the borrower beyond the return. Is the deal interesting? Will it lead me to expertise in a new area? The post is silent on these points—the deal is not well defined. I have not heard of the borrower before seeing this post. There is nothing compelling in the post that would cause me to reach out, it is more likely that I would avoid the poster if I remembered them. (I have made several atypical loans of less than $40k in the last year. Those loans were to partners who have borrowed from me before or to borrowers I thought would lead to long term relationships. I prefer larger deals.)

Details: describe item by item; give the full particulars of

Finally, the poster states he can pay back the loan “with interest in 6 months”. How? Does the borrower expect funds to become available from another deal? Will he sell the property? Will he refinance? (Does he have a commitment for the refinance?)

Attitude: a settled way of thinking or feeling, often reflected in a person’s behavior

The poster indicates in the comments that he expects anyone who is interested in this deal will contact him. That is not likely. There are simply too many unanswered questions and the post is not compelling in any way. The post attracted some negative attention and the poster responded with anger or frustration. That is a poor strategy. Those who mocked the post are not going to help. If the poster cannot respond positively, they should not respond. The poster should be concerned with the impression they leave with those who commented who may be capable of helping and are probing for more information. The angry responses are likely to deter them and the other 4,000 people who may be watching this thread and are silent.

The poster responded to information commenters gathered from visiting their fb page, stating that “has nothing to do with my private deals”.  That is not how a potential lender views this. You are asking a stranger for money and you do not seem willing to share details of your situation. That is not likely to be successful. I will discuss this further in an upcoming blog, but when you approach someone for funding, everything, from the initial contact on, matters and will be weighed by your potential lender. Private lenders are not compelled to lend to anyone and they can withdraw from considering your deal at any time, for any reason.

Result: a consequence, effect, or outcome of something

The poster attracted a lot of attention with this post. He made some comments (including giving me permission to share this critique publicly) which indicate he is open to learning. That is wonderful, but I believe he has done himself more harm than good. He has alienated many of those who are able to and might have been most likely to help.

*Definitions for subheadings taken from google.