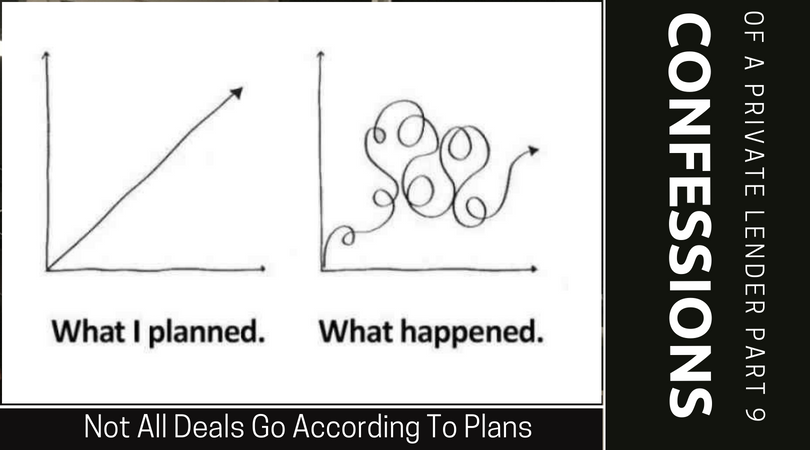 Confessions of a Private Lender Part 9: Not All Deals Go According To Plans

Not all deals go perfectly well.  One of the advantages of working with a private lender is that they may be much more flexible when something unexpected happens.  If the lender has some experience as an investor they may be able to help you work through a difficult situation.  I did say MAY.  If you ignore my inquiries or don’t take my inquiries seriously and then you miss a payment deadline, I can and will declare your loan in default.  I don’t really want to but I will hire lawyers if necessary.  There are generally more beneficial solutions to a business arrangement than using the courts.  On the other hand, I am a landlord and though I rarely want to go to court to evict a tenant (ok, I have had a couple tenants that I was happy to evict) I will do so if they don’t pay the rent.

I Wanted To Say No

The deal I am going to describe is one I was reluctant to do in the first place.  That’s understating it a bit.  I knew I wanted nothing to do with this.  The deal was presented by a guy I met at a REIA.  (Have I mentioned how important REIA’s can be?)  We had spoken a few times and I knew he was an active investor.   A few days prior we went out (this was the first time we met outside of a REIA). He mentioned that he had a potential deal but at that point he wasn’t sure it would develop.  This was different than his usual model, which was rehab and flip, because this one was so nice it needed no rehab.  I didn’t believe it.  I listened, to be polite, and told him to call me if it happened.

A few days later I got the call.  He wanted a 3 month note to fund the purchase and resale of a home in Detroit.  This was one of Detroit’s many nice neighborhoods.  The problem is that I am not very familiar with Detroit.  Before this, all my deals with single family homes had been in the Southeast Michigan suburbs.  I absolutely did not want to be a landlord in Detroit.  I know people that do quite nicely renting homes in the City but it is a different model than what I am familiar with and there are aspects of being an urban landlord that I wanted no part of.  One of my possible exit strategies was missing.   He needed the funds the next day, so I had little time to decide.  I didn’t see that as a problem because I was sure I was going to say no.

So, we did the deal.   The deal approached the end of the term and there was no communication.  I knew the buyer had been identified but I did not know if a closing date had been scheduled.  I waited…until day 93… on a 90 day note.  When I reached the borrower he started talking about how busy he had been (he had several projects going on simultaneously, so did I) and he shared some problems he was having with some of them.  I asked him if he knew the date and he got a bit quieter.  He knew the term of the note was expiring but did not know it had already passed.  I asked him what happens next and he said that I can take the house.  That was the right answer.  Now we could talk.

It turns out the buyer, who was in Australia, was critically ill.  You can’t anticipate everything.  We worked out another plan, assuming this buyer would not be able to perform, but to our surprise the illness made him even more determined to complete this deal and motivated him to do several others.  The deal went 2 months long but communication between my partner and I was no longer a problem.  I was paid handsomely when the deal closed.  More importantly, I learned a great deal about my partner (and he of me).  We became friends.   I have funded six deals for him since that one.