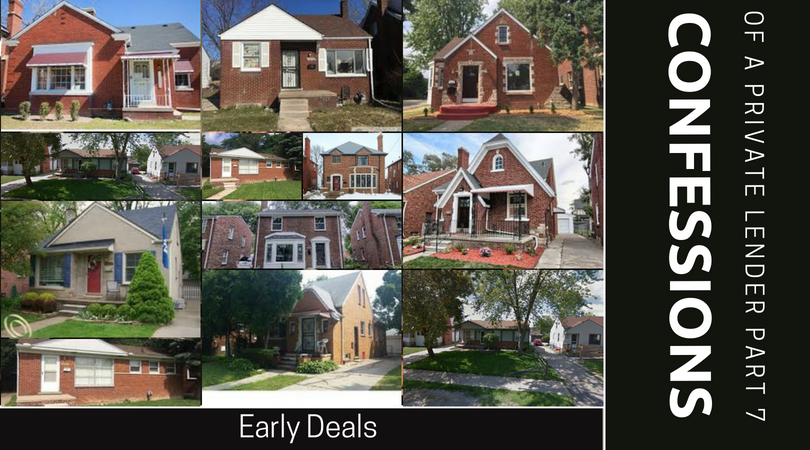 It may be useful for me to talk about some of the deals I funded and how they developed. I have already discussed most of the financial details of the first deal I funded in the first two installments of this blog: “Confessions of a Private Lender, part 1”  and “Confessions of a Private Lender, part 2”. I didn’t mention that it was I who initiated the transaction—I approached the borrower and asked them if I could give them my money. The principals of the company (the borrower) gave a short presentation on what they were doing at a real estate investor association (REIA) meeting. Of course, they were not just sharing their strategies. They were looking for funding, but they never asked for money directly. Rather, they were presenting an opportunity for those who were motivated enough to see it. I liked what I heard. I stayed to speak with the presenters. In fact, I recall I chased them down the hallway when they were leaving. (It may be difficult for some of you who know me to believe, but there was a time when I had difficulty approaching people I did not know. This was a big step for me. I was ready to invest.) We had a few follow up conversations and I made my investment a couple months later.

This was in 2010, during the last real estate crash. The company model was short sale flips. They made offers on several properties that were nearing foreclosure and negotiated with the banks to get their offers approved. At the same time, they were looking for people they could sell the homes to if they came to terms with the banks. This is a model that is currently out of favor—the rules have changed. I wouldn’t fund these types of transactions now and don’t know anyone pursuing them.

I had never invested this way before. Part of what was appealing, was that the term of the loan was very short. The documents stated a 45 day loan period. I interpreted the short term to be less risky. (Caution: a short term is not necessarily less risky.) I was at the REIA meeting because I was open to investment possibilities and the speaker presented an opportunity. Join your local REIA (the Renegades is one of the best–I attend their meetings frequently because the members bring me deals) and talk to the people there. There are always people looking for opportunities and many of them have funds available or have access to funds. Your next partner may be sitting next to you.

Take time to develop relationships. It was a couple months before I actually committed the funds for that first deal. It didn’t take much, just a couple phone calls, before I was comfortable, but had this partner pressed for an immediate commitment I probably would have backed away. Remember, I approached the borrower. I was already interested and nearly ready to take action. When someone comes to you, your most important job is to not scare them away.

I funded 100% of this deal. (The borrower provided the documents and dictated the terms of this deal. Now, I am unlikely to participate in deals if the borrower does not have personal funds at risk and, when I participate, I specify the terms of the investment.) The borrower had none of their own money in the deal and they were not required to make any payments until the final sale. I believed they were doing several deals simultaneously and were having success, but I didn’t ask them to prove this. I spoke with several investors who had either done business with the principals or knew of their business before I moved to closing.

I also spoke with a lawyer at LegalShield to discuss the mechanics of private lending and to have the documents reviewed.  LegalShield, Inc. is a service that allows you unlimited phone consultations with major law firms in every US State and most Canadian Provinces. You speak with attorneys who specialize in the area of law that your issue requires. You can also have documents reviewed by lawyers at no charge beyond the monthly membership fee. It is a great tool. In addition to becoming a member you have the opportunity to become an associate and turn this into an income stream. I am an associate. If you are interested in learning more, my website explains the service thoroughly: www.legalshield.com/hub/jrabinowitz . This is a secure site—you can safely register there.

My next deal with this borrower was 14 days later. They borrowed $47,650 and returned $49,600. These were the same funds. They knew I had the funds available. Since they performed exactly as they said they would, I was happy to lend to them again. By far, your best sources of funds for your next deal are your current private lenders. Treat your lenders well and they will stay with you. They may even tell their friends about you and help you raise more capital than you can imagine. I loaned funds to this group 10 times over a year. All but a couple loans were paid back within 45 days. Three times I was paid back within 10 days. I was happy to refer other lenders to them.

I have completed dozens of deals since these early ones. Most of my deals are with partners (I consider my borrowers to be partners and treat them as such) with whom I have completed several deals. Most of the deals with the same partners are similar but the structures are modified to fit specific deals. The structures of my deals with different borrowers vary greatly. I enjoy participating in deals that have different twists—it helps me learn more about contracts, markets, etc. It is interesting. It also helps me find new partners and to recognize deals that others may not see.

I was pleased to be invited to contribute to this redesigned site.  We are continuing the series past the original 6.  If you would like me to post details of other deals or are interested in other topics, please let me know.  If I touch on a subject that interests you and that you would like me to expand on, or if you would like to suggest other topics, please leave a comment and let me know.   If you think I have missed the mark completely, go ahead and tell me that also. You won’t make me cry and it may turn  into an interesting discussion.  Please  join the email list, follow on facebook, and add on twitter.

*Pictures in cover image may or may not be actual deals mentioned here.